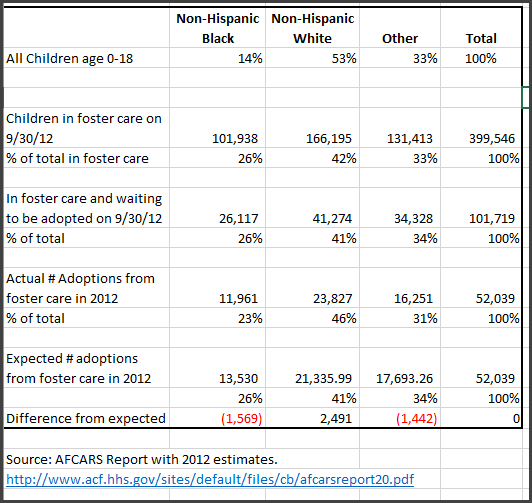 My answer, originally published on Quora.

Q: Why do so few African-American children get adopted?

My sister has been looking to adopt for a while now so we've been talking about adoption in general for some time. Over several conversations and research it became clear just how disproportionate the numbers of unadopted black children are.

Most adopting couples are white, which makes sense because of the overall racial distribution, but it gives the impression that black families are much less likely to adopt at all. Is this because of a system that discriminates against potential adopting black families?

It seems heartbreaking that so many children suffer it out in the system when there's so many adults that want children. I wish we could end "blood line" concept and take care of the children already here.

Since you are asking about unadopted children, I assume this question is about adopting from the Foster Care system. Basically, in the USA, the issue is as follows:

only 14% of USA kids are non-Hispanic black, but are 26% of the kids in Foster Care. Reasons for this might be institutional bias, but there are also some studies that indicate that black children are more than 2x as likely to suffer abuse than the average child. (See Dept of Health & human Services study, "Fourth National Incidence Study of Child Abuse and Neglect (NIS–4) Report to Congress".)

Second: Once in Foster Care, black children are made available for adoption at roughly the same rate as white children.

But then, in terms of actually being adopted, fewer black kids are adopted than you would expect, but more white kids. See table below:

From there, it is NOT straightforward to figure out WHY proportionately fewer black kids are adopted from foster care than white kids. In fact, from the following data points, you'd expect black children to be adopted at a slightly higher rate than white kids:

The vast majority of women--black or white--who are seeking to adopt say they will accept a child of any race.

I'd hypothesize a few explanations, but I don't have the data to prove them:

If you had the actual data set, you could analyze race vs age vs disabilities vs sibling group size. That data set is available here: National Data Archive on Child Abuse and Neglect (NDACAN), Cornell University, College of Human Ecology, but I do not have the energy to apply for access to it.